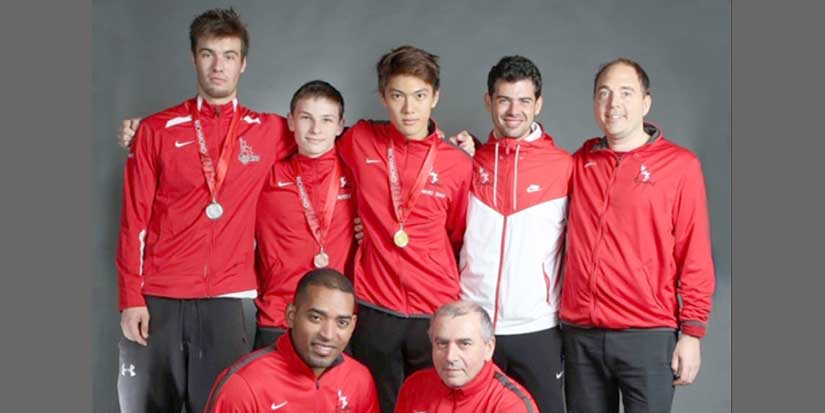 The team at Dynamo Fencing Club turned in a commanding performance at the recent national championships.

The performance was as dominating as it was historic.

At the recent national championships, athletes from the Dynamo Fencing Club won every gold in men’s epée—U15, cadet, junior, senior and veteran. They also secured top spot in the U15 women’s epée.

For Igor Gantsevich, Dynamo’s dedicated and affable president, the results further embrace a club mindset that began over a decade ago with his equally hard-working dad Victor.

“This is huge for us,” Igor says, noting Dynamo won more medals than all the other provinces, save Ontario, combined.

The feat becomes even more jaw-dropping after another 16 medals, and 20 additional top-eight placings, are included.

“We are the only club in the country to win medals in all three disciplines—foil, epée and sabre,” Gantsevich notes. “Everyone, the past few years, has noticed us arriving on the scene and now we are definitely dominating. And we are (enjoying) more and more success in North America.”

But even as Dynamo’s medal count climbs, Gantsevich is equally encouraged by what the success of his athletes may mean for their peers around the province.

“The higher our level grows, the more it pushes (others) to be better,” he says. “We are seeing many new clubs opening and the level of fencing is increasing. That’s great. We want fencing in B.C. to best the best in the world and the only way to do that is by (encouraging) more competition.”

Gantsevich oversaw the opening in September of a second full-time facility at 238 Fell Ave. in North Vancouver. The new facility reflects a growing market in North and West Vancouver.

“A huge percentage of our members were driving from West or North Vancouver to Richmond four to six days a week. Now, these members are able to train a major portion of that time in North Vancouver. This is all thanks to our amazing partnership with the West Vancouver School District.”

Gantsevich is modest and unapologetic about the amount of time he devotes to fencing—and to his dream of it becoming a mainstream sport.

“When you come from nothing you are willing to go through fire to achieve your dreams. That (mindset) is set first by my father and has a trickle down affect.”

He’s also quick to praise the dedication of Dynamo’s coaches, which now number 14 full-time and three assistants. The number represents roughly half of all the full-time coaches in Canada. What’s more, the club recently added Hristo Etropolski to the fold. Etropolski is a two-time Olympian and arguably half of one of the best brother tandems in the history of sabre. He’s also a very successful coach, having had a huge club in Chicago for many years before immigrating with his family to Canada.

“We are always hungry. Next nationals I want 30 medals; I always want more. That’s the spirit in our club. We are never satisfied. After the national competition finished on Sunday, we were back to work on Monday.”

With the general level of fencing continuing to rise, Gantsevich’s willingness to contribute also gets stronger. His ultimate dream is to produce a gold medallist at the Olympics, ideally from Dynamo, though he says “I’ll be just as proud if (that individual) comes from Nova Scotia or Ontario.”

Olympic Oval remains a lasting legacy of the 2010 Games

Sockeyes will begin No. 50 at home

Legal experts say Ottawa unlikely to be 'main combatant' in Alberta so...

List of areas the Alberta government accuses Ottawa of overreaching

Smaller Canadian cities rank high on environmental scorecard that has...

Biden: Nevada site sacred to tribes to be national monument

Stocks waver on Wall Street ahead of speech by Fed chair