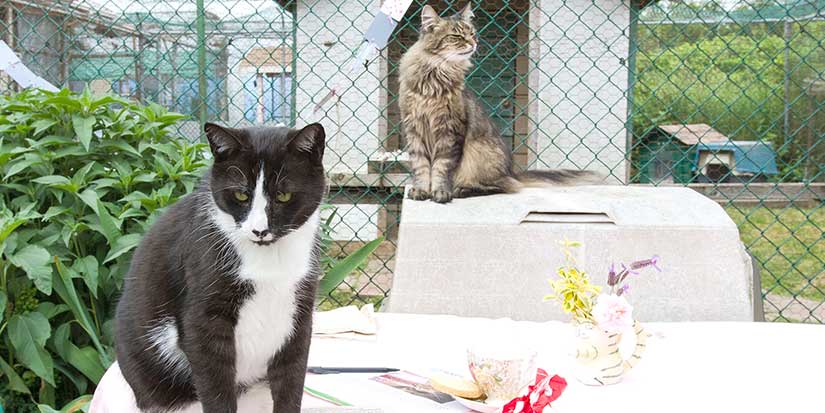 Cats living happily and safely at the RAPS Cat Sanctuary.

The Regional Animal Protection Society will place adoptive cats only in homes that commit to keep the cat indoors. We do encourage people to build “catios,” which are safe, enclosed outdoor spaces, perhaps accessible via a window or sliding door, and we encourage people to take their cats outdoors on a leash if the animal will put up with such a thing.

The startling disparity in life expectancy is not only because cats can get hit by cars or attacked by coyotes. Outdoor cats are three times more likely to contract a parasitic infection than indoor cats. They are susceptible to upper respiratory infections, feline distemper, infectious peritonitis, feline immunodeficiency virus (feline AIDS) and feline leukemia, as well as fleas, ticks, ear mites, intestinal worms and wearing ringworm.

They can also get into fights with raccoons and other wildlife, be chased and attacked by dogs or wild animals, ingest poisons and other toxins, and become caught in trees where they can, if not found, become dehydrated, hungry and injured.

But there is even more to it than this. In the United States, there are an estimated 84 million pet cats, slightly more than half of which are allowed to roam outside. (Let’s say Canada has 8.4 million.) An additional number— estimates vary widely between 30 and 80 million—live as stray or feral cats. All of these animals, limited only by their ability, do what comes naturally: they stalk and prey on birds and small mammals.

In Richmond, this problem is mitigated somewhat by the fact that RAPS has been trapping feral and stray cats for 24 years and providing them forever homes at the RAPS Cat Sanctuary (currently home to approximately 500 cats), effectively eliminating the problem of feral cats. But we are an exception in the world.

Figures (again from the U.S.) indicate that domestic cats kill 3.6 million birds every day on average—a total of about 1.3 billion annually. That is somewhere between five and 10 per cent of all the land birds in the country killed—every year—by domestic cats.

Issues like climate change and loss of habitat are long-term dangers that birds in North America are already facing. But the greatest threat of all, believe it or not, is cats. Around the world, domestic cats have contributed to the extinction of 22 bird species and are threatening dozens more.

In addition to the number of birds they kill (or maim), cats are also the largest anthropogenic causes of mammal deaths. By killing small mammals, reptiles and amphibians, cats are affecting the ecosystems where they live. As a result, some species abandon the ecosystem to find better hunting elsewhere, or they starve to death.

Down the food chain, this can result in an increase in the types of things that birds and small mammals consume, such as insects and small invertebrates.

It is natural for cats to want to go outside. But, for the environment in which we live, it is not natural for them to be there.

Eyal Lichtmann is CEO and executive director of the Regional Animal Protection Society.

Sport BC lauds champions, on and off the field

Businesses can get PST rebate for capital investments

Half of COVID-19 cases in B.C. are variants: Henry

‘Hate has no place in Richmond’

Hit the dirt for Earth Week

We Are YVR: Robyn Renaud

What’s happening in Richmond this weekend

Max out your good spirit

Canucks games against Leafs postponed as team returns from COVID

COVID-19 outbreak declared in Iqaluit as infection numbers rise after...

'Quite fitting.' Prince Philip's funeral an online event for all but a...

Committee reverses itself on wrapping up investigation into military m...

March US home construction jumps to fastest pace since 2006

China's growth surges to 18.3 per cent but rebound levelling off

AP Interview: China says US 'too negative' toward China

The pandemic has upended the Oscars. Good, producers say